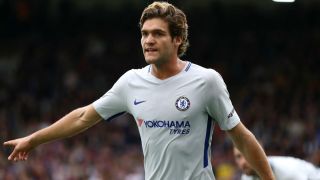 Marcos Alonso wants Chelsea to forget all about Saturday's shock defeat to Crystal Palace and focus only on making it three wins from three in the Champions League on Wednesday.

The English champions lost 2-1 to the Premier League's bottom club at the weekend, with the disappointing result at Selhurst Park leaving them nine points behind leaders Manchester City.

Manager Antonio Conte was criticial of his players in the immediate aftermath, although they get the chance to bounce back with the upcoming visit of Roma to Stamford Bridge.

Alonso believes Conte's harsh words will lead to a positive reaction from the squad, while Chelsea could also be boosted by the return to action of record signing Alvaro Morata.

“It's the truth. It wasn't our best game on Saturday," Alonso told the media.

"It's a good call from him to motivate us and make us work hard to change things from the last performance. Football is a sport that changes very quickly.

"Things didn't go very well on Saturday. We had enough chances to win the game, but it wasn't a good performance from the team. The only solution is to work hard and win the next [game]."

Training is underway at Cobham, as preparations continue for tomorrow's game against Roma... October 17, 2017

Morata has returned to training after overcoming a hamstring strain picked up prior to the international break.

However, Conte has indicated his squad is struggling to cope with the added demands of competing in Europe, with N'Golo Kante, Danny Drinkwater and Victor Moses currently sidelined.

“When you play four competitions there are so many games," Alonso added.

"Because of this there is more risk of injury or tiredness. We train very well to stay away from injuries, and it's only something weird that's happening now with so many injuries.

"The players are very fit and we are ready to play all these games. Hopefully we will get these players back soon and we will not have many more injuries."