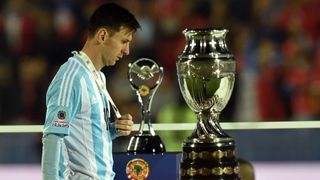 Barcelona superstar Messi missed out on a major international trophy for the second time in 12 months as, after suffering a 1-0 defeat to Germany in the World Cup final in 2014, Argentina were beaten on penalties by hosts Chile in the Copa showpiece.

But Argentina will have another chance to win their first Copa since 1993 this year at the Centenario tournament in the United States - which is taking place as a special edition event outside the competition's usual four-year cycle.

And Messi is confident recent disappointments have steeled Argentina for success this time around, telling the BBC's Football Focus: "It was sad to lose the two finals but they escaped us. If you look against Germany we nearly went to penalties, we were ready for that.

"Against Chile the match was close, we had the better chances, but we ended up losing on penalties we were very close and it was really sad.

"We have big expectations and a huge desire to fulfil our dream of finally winning something. We have a new Copa America coming up this year and we have a better chance compared to the last one, so we're just getting prepared for that.

"In the last couple of games Argentina have done very well. We could take many positive things away from that and I truly believe that it can be a turning point.

"I feel that we are improving and that from now on it's important to win in the very tough South American World Cup qualifiers."