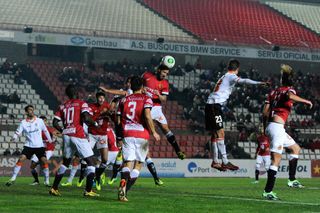 The 111th-edition of the Spanish cup begins on Wednesday with 18 first-round ties and Gimnastic will be out to prove their success in the competition last term was no fluke.

The third-tier side reached the round of 32 on that occasion and almost pulled off a huge shock against Valencia.

Gimnastic famously held Valencia to a goalless draw in the first leg, but Paco Alcacer's goal in the return clash sealed progression for the La Liga outfit.

Valencia's failure to win in the first leg played a role in the sacking of Miroslav Dukic, who was not in charge for the second leg.

Prior to reaching the last 32, Gimnastic beat Alcoyano and Albacete on penalties before a 1-0 win at Burgos.

And they will enter Wednesday's home tie in good spirits after a 1-0 league win at L'Hospitalet on Sunday, which came thanks to David Rocha's injury-time goal.

No sides from the top two tiers of Spanish football are involved in the first round.

Cartagena's reward was a trip to Camp Nou as they lost 7-1 to Barcelona over two legs but a similar tie is sure to be on their minds as they host UCAM Murcia.

Real Jaen were beaten by Barcelona's city neighbours Espanyol last term and visit Cornelia in the first round this year.

Puertollano, Barakaldo and Racing Ferrol have all been drawn at home - facing Teruel, Trival Valderas and Atletico Astorga respectively.

Real Oviedo have started the Segunda B season brightly and will hope to continue their unbeaten run against Amorebieta, who bounced back from an opening-day thrashing with a 2-1 win over Huesca on Saturday.

Fourth-tier Gimnastica Torrelavega will hope to cause an upset at home to Lealtad, while Linense, still without a win this season, visit Marbella.

Marino de Luanco hit the road to face Real Aviles and Toledo visit Huesca, while Alcoyano are in action against Pena Deportiva.