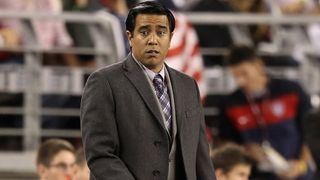 Godoy Cruz booked their spot in the last 16 of the Copa Libertadores, while The Strongest were convincing winners.

A 1-1 draw at home to Libertad kept Godoy Cruz unbeaten and saw them secure progression from Group 6 on Thursday.

Danilo Santacruz had headed Libertad into a 24th-minute lead in Argentina, but the hosts were level before the break.

Juan Fernando Garro tapped in an Angel Gonzalez pass for the easiest of finishes and Godoy Cruz held on despite the latter being sent off late.

Lucas Bernardi's men top the group on 11 points ahead of Atletico Mineiro (10), Libertad (5) and Sport Boys (1) with a game to play.

The Strongest are on track to advance from Group 2 after a 5-1 hammering of Sporting Cristal.

Matias Alonso struck a brace for the Bolivians, opening the scoring from the penalty spot in the 19th minute.

Alejandro Chumacero finished off a team move to make it 2-0 and it was three before half-time thanks to Alonso.

A Diego Bejarano own goal saw Sporting pull one back before a stunning Fernando Martelli free-kick and Walter Veizaga goal.

Sporting's misery was completed in the closing stages when Josepmir Ballon saw red.

Cesar Farias' The Strongest are second in the group to Santos, who remained unbeaten with a 3-2 win at home to Santa Fe.

In Group 8, Guarani inflicted Zamora's fifth loss in as many games with a 3-1 victory.