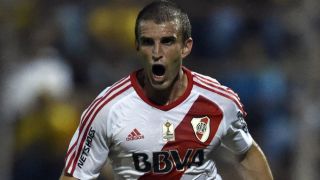 River Plate kicked off their 2016 Copa Libertadores campaign with a dominant 4-0 victory against Trujillanos on Thursday.

The Argentine outfit scored all four goals in the second-half to see off their Venezuelan opponents in Valera.

Leonardo Pisculichi opened the scoring ten minutes into the second half, before Lucho Gonzalez and a brace from Ivan Alonso wrapped up the result to put River top of Group 1.

Nacional were denied a dream start to their tournament after conceding a late penalty in a 1-1 draw away to Rosario Central.

After a scoreless first half, Nicolas Lopez put the Uruguayans ahead on 56 minutes with a well-taken finish, which saw Nacional substitute Erick Cabaco sent-off for dissent during the celebrations.

Nacional were on track to hold on for the win against their Argentine opponents, but a foul from Mauricio Victorino in the box saw him sent off, with Marcelo Larrondo dispatching the resulting spot-kick to secure a draw for the home side.

In Paraguay, Cerro Porteno managed to hold on for a 2-1 home win over Chilean outfit Cobresal.

Two goals in three minutes early in the second half from Jonathan Santana and Luis Leal had Porteno cruising.

Lino Maldonado managed to pull one back for Cobresal just after the hour mark, but Porteno managed to hold on for an important win in Asuncion.

Some late drama in Guayaquil saw Emelec secure a 2-0 victory against Deportivo Tachira.

The game seemed headed for a scoreless draw until Emanuel Herrera's penalty on 81 minutes finally broke the deadlock.