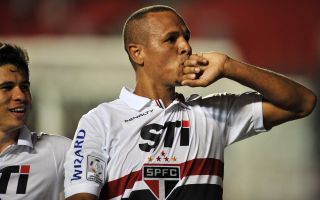 The Brazilian giants could only draw 1-1 at home against their Chilean opponents in the first leg as Luis Fabiano's 18th minute strike was cancelled out by Nicolas Castillo's goal on 41 minutes.

Sao Paulo, the 2012/13 Copa Sudamericana winners, have struggled in the Brazilian Serie A this season, spending several weeks in the relegation zone before climbing to 10th position.

Catolica have only lost one game in the Chilean Primera Division and are two points clear of O'Higgins on top of the league.

Fellow Brazilian side Ponte Preta hold a strong 2-0 advantage over Deportivo Pasto going into the second leg in Colombia.

A victory in the tie will give Ponte Preta a huge boost, with the club sitting in the Serie A relegation zone, six points from safety.

Libertad travel to Brazilian club Sport Recife with a 2-0 lead after the first leg in Paraguay.

Recife stumbled in their first leg courtesy of goals to each of Libertad's central defenders and will need to defend set pieces more thoroughly to have a chance to progress.

Colombia's Itagui will host Brazil's Coritiba with a slender one-goal advantage after Yessi Mena's goal in the first leg.

In another Colombian-Brazilian battle, Atletico Nacional makes the trip to Bahia with a 1-0 lead after the first tie.