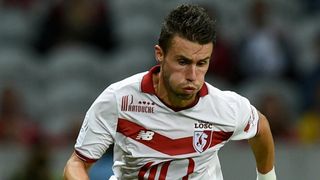 Sebastien Corchia is aware of interest from the Premier League as Arsenal reportedly eye the Lille and France international full-back, but is still undecided on his future.

With his contract due to expire at the end of the 2017-18 campaign, right-back Corchia has been linked with French giants Paris Saint-Germain, Sevilla and Napoli, and now Arsenal have emerged as potential suitors.

The former France Under-21 captain – who has called Lille home since 2014 – is flattered and excited about a move abroad, having never played outside of Ligue 1, although the 26-year-old insists nothing has been decided as Marcelo Bielsa prepares to take over at Stade Pierre-Mauroy next season.

Speaking to Omnisport, Corchia responded to the Arsenal rumours by saying: "I can't mention any names of course, that is confidential, and my agent knows more than I do. But yes, I have heard of interest from the Premier League.

"It is of course very interesting. It is an amazing league, and normally French players do well there. Maybe because our Ligue1 is also very physical, so it is not a huge change to go there in that way, which may scare players from other countries not so used to the physical aspect.

"Generally it is always flattering to feel the interest of other big clubs - and proof, that people have seen and appreciated my performances and development."

Corchia has been an ever-present in Lille's starting XI this season – starting in all 37 league matches in 2016-17 – scoring once.

Of links with Roma and Napoli, Corchia – who made his France debut in November last year – added: "I have heard about Italian interest as well. I am half French and half Italian and have a double citizenship, so I have been brought up in France but with a lot of interest in Italian football.

"Serie A is a great league. Some parts of my family would be happy if I went there."

"Nothing is decided, so I don't know yet, whether I am leaving or staying. And I have never said, that for sure I want to leave this club," he continued.

"The new project in Lille with Bielsa as new coach looks very exciting, but the club could also choose to sell me now. There are negotiations, but it is only my agent, who knows how it looks right now.

"No doors are closed, and everything is possible. But I must admit, that after almost 300 games in French football a move to a foreign club could also be interesting.

"I am 26 years old and entering what is normally the best years of a career, and I would really enjoy to be playing in the European competitions. That would surely be an advantage for me in my ambition to play regularly for France."