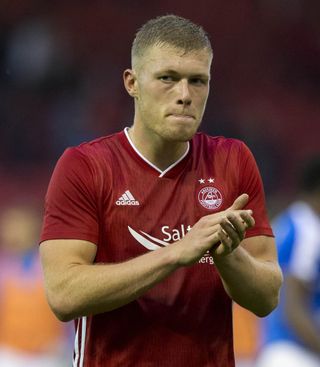 Aberdeen have been dealt a major blow after top scorer Sam Cosgrove was ruled out of their Europa League showdown with Rijeka.

The Reds crashed to defeat in Croatia last Thursday but will not be able to rely upon Cosgrove, who has already found the back of the net eight times in just six appearances so far this season.

The 22-year-old sat out Sunday’s surprise defeat at St Mirren with a tight hamstring and has failed to recover in time for Thursday’s Rijeka return.

McInnes said: “Sam is out unfortunately and so is Craig Bryson.

“But as important a player as Sam is, we’ve shown we can get to a level of performance without key players in the past.

“We’ve got enough attacking threat in the team that we shouldn’t be solely reliant on Sam. We hope to show that tomorrow night.”

The Dons have previous with the Croatians having dumped them out of the competition in 2015, but it was the hosts who last week claimed the upper hand as McInnes’ team paid the price for a lack of cutting edge.

However, the Aberdeen boss believes his side can create one of the great Pittodrie nights by overturning Rijeka’s lead and securing progress to the play-off round.

He said: “That’s the intention. We would love to make this a game to be remembered.

“I’m certainly not looking at this as an impossible task.

“It’s half-time in the tie. We’ve come back from Croatia kicking ourselves that we’ve allowed it to get to 2-0.

“Having watched it back, the game was uneventful and for the majority of it a lot of our work was good. But we’ll certainly have to carry more of an attacking threat.

“There’s no point going over last week’s game. It’s finished and we now know what needs to be done.

“It’s important we try to win both halves. It’s not about being Gung-ho and negligent but about being measured and having the belief that we can replicate some of our earlier home performances.

“But we’ve got it all to do. It’s up to us to change the course of events.”