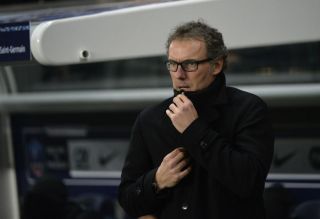 Questions are again likely to be raised regarding Laurent Blanc's future at PSG, with the Ligue 1 champions' display hardly dispelling suggestions that the coach has lost the dressing room.

Blanc has found himself under increasing pressure after presiding over an underwhelming title defence so far, although his side were lively in the first half against his former club.

Edinson Cavani headed PSG into a 14th-minute lead at Parc des Princes, with Javier Pastore adding a second just after the half-hour mark.

But Willy Sagnol's side produced a significant improvement after the break and pulled one back through Diego Rolan.

Bordeaux's hopes of completing a comeback were boosted by Zoumana Camara's 83rd-minute red card for a second booking, but PSG managed to hold on to secure progression.

Saint-Etienne needed extra time to beat Ligue 2 side Tours 5-3, despite holding a 3-1 lead with 17 minutes to go.

A Moustapha Sall own goal gave Tours an early lead, but the visitors eventually restored parity in the 64th minute thanks to Kevin Monnet-Paquet's close-range finish, before Ricky van Wolfswinkel scored twice in quick succession to seemingly send Saint-Etienne into the last 16.

But, Youssef Adnane pulled one back a few moments later with a spectacular half-volley from 25 yards and Brian Bergougnoux secured extra time with a delicately chipped penalty 10 minutes from time.

A second yellow card for Christian Kouakou in the 103rd minute handed Saint-Etienne the advantage, with Mevlut Erding netting shortly afterwards and Monnet-Paquet doubling his tally to send the Ligue 1 side through.

There were to be no such problems for Monaco and defending champions Guingamp, as they recorded 2-0 triumphs at home to Evian and Chateauroux respectively.

Brest needed extra time to dispatch of fifth-tier side Cholet, as they eventually ran at 3-1 winners, while National club Le Poire-Sur-Vie won 1-0  at Bressuire in another extra-time clash.

The other side to secure their passage on Wednesday was Boulogne, who scraped past Grenoble thanks to a goal from Julien Begue after just three minutes.