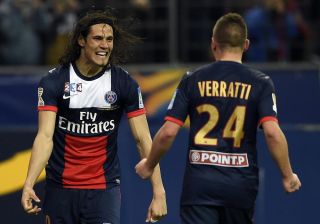 Following their UEFA Champions League exit to Chelsea and defeat to Lyon in Ligue 1, much of the build-up to Saturday's showpiece had centred around Blanc and reported uncertainty over his future at the Parc des Princes.

Cavani's role has also come under scrutiny in recent weeks after his apparent unhappiness at being played out of position, and his failure to live up to his big-money price tag for much of the campaign.

However, both were left smiling after a solid performance at the Stade de France, as Cavani struck twice in the first half to help PSG add the Coupe de la Ligue to their Trophee des Champions title - with the defence of their Ligue 1 crown all but certain to follow.

In the absence of injured talisman Zlatan Ibrahimovic, Cavani finally proved that he was the man for the big occasion, despite Blanc suggesting recently that he had one eye on the FIFA World Cup, when he edged PSG in front after just four minutes.

His close-range finish settled any PSG nerves following their recent blip and the Uruguayan then doubled his side's advantage from the penalty spot shortly after the half-hour mark.

Cavani made no mistakes after Anthony Lopes had brought down Lucas Moura while attempting to clear a lofted ball, although Alexandre Lacazette's 21st goal of the campaign shortly after the break kept the contest alive.

It mattered little however, as PSG saw out the game comfortably to win the competition for a record fourth time and put themselves on the verge of  a league and cup double.

Having been handed the chance to lead the line, Cavani gave the Ligue 1 champions-elect an ideal start when he nudged home the opener from close range after great play down the left flank from Ezequiel Lavezzi and Maxwell.

The Argentine forward backheeled the ball into Maxwell's path and, after the Brazilian had dinked an attempt over Lopes, Cavani prodded home.

It was harsh on Lyon, who had started brightly despite the absence of injured duo Clement Grenier and Yoann Gourcuff, and Bafetimbi Gomis perhaps should have done better with his effort from inside the area that only found the side netting.

After a frantic opening 20 minutes, the game settled down until Cavani doubled his tally from the spot.

Following a long ball from Thiago Silva, Lopes looked to clear but instead missed the ball and brought Lucas down, although Lyon will likely question whether the incident took place inside or outside the area.

Cavani stepped up to score, and the Uruguayan almost had his hat-trick before the break but lost his composure when played through on goal by Lucas - blazing his effort high over the crossbar.

However, Lyon were determined not to let PSG saunter to the title and Lacazette produced a stunning virtuoso goal after 56 minutes to make life uncomfortable for Blanc's men.

The forward ran much of the length of the PSG half and, when Alex continued to back off, he fired past Nicolas Douchez into the far left-hand corner.

It proved to be a consolation though, as they could not find a second.

The result meant that Remi Garde's third major final in as many seasons at the helm ended in defeat, with Lyon finishing runners-up as they did to Marseille in the final two years ago.