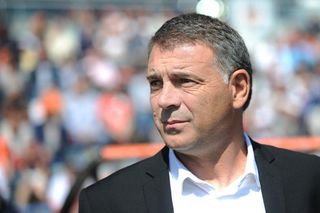 However, after a shaky start to life in the second tier, last term's strugglers have shown signs of turning their form around with back-to-back victories in their last two fixtures.

Ajaccio picked up one point from their opening two matches, but defeated local rivals Gazelec Ajaccio 2-0 before beating Tours 1-0 and currently sit fifth.

Their first hurdle in the Coupe de la Ligue is a trip to Ligue 2 leaders Troyes, with progression to the third round - when a host of top-flight clubs enter the competition - the prize.

Troyes remain unbeaten in the league so far this season, but were held to a goalless draw by Laval on Friday.

Dijon are among the early frontrunners in Ligue 2 after picking up two wins and two draws from their opening four fixtures, and visit Laval in the cup this week.

The sides have already met in the league once this season, when Romain Philippoteaux's 50th-minute penalty proved decisive in a 1-0 win for Dijon.

Gazelec Ajaccio will need to recover quickly after being involved in a seven-goal thriller at Clermont on Friday.

After going two down in the opening four minutes of the second half, Gazelec hit back with a brace from Kevin Mayi.

Cup opponents Creteil will be looking to pounce on any signs of fatigue shown by their hosts.

Elsewhere in the draw, Auxerre face Nancy, Chateauroux host Clermont, and Angers are at home to Arles.