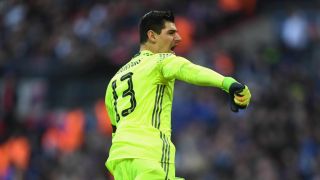 Thibaut Courtois is hoping to be rewarded with a new Chelsea contract after helping his team to win the Premier League title.

Courtois claimed the Premier League Golden Glove award after his 16 clean sheets edged out Tottenham's Hugo Lloris for the prize, although his side missed the chance to win the double when they lost 2-1 to Arsenal in Saturday's FA Cup final.

The Belgium international has previously been linked with a move to Real Madrid, but the 25-year-old is keen to commit his future to Stamford Bridge.

"Contract talks haven't opened but I am happy at Chelsea," Courtois told Sky Sports after Chelsea's loss to Arsenal at Wembley.

"I hope they reward me with a good contract, then there will be no doubt I will sign it."

Former Atletico Madrid loanee Courtois reflected on the disappointment of missing out on the FA Cup, with Aaron Ramsey heading the winner after Victor Moses was dismissed for a second yellow card after being deemed to have dived.

"It's not a good feeling now," Courtois told the Chelsea website. "I had the same thing in Spain when I won the league and then lost the Champions League.

"We wanted to end on a high, now we feel sad. Winning is everything so this is hard to face but we have to try to forget it."

Alexis Sanchez's early opener at Wembley was controversial, with referee Anthony Taylor consulting with his assistant before giving the goal, and Courtois insisted it should not have stood.

"The first goal should never have been allowed - it was clearly a handball and then Ramsey was offside because he was interfering in play," Courtois said.

"I think it was a handball even if it was maybe not deliberate. His hands were not in a natural position. At the start of every season they tell us the rules and now the hands were not where they should be.

"I think it should have been disallowed for that but not only that. If Ramsey was not in an offside position, I could go out and touch the ball but I had to stop because he was there.

"They gained momentum after that and they dominated. They could have scored one or two more and we have to accept that as well. We knew they would play well as they have the last weeks. We knew we would face a tough game."