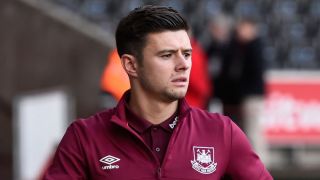 Aaron Cresswell has signed a one-year contract extension with West Ham that will see him remain at the Premier League club until 2021.

The left-back, who arrived from Ipswich Town in 2014, has been a cornerstone of the team's defence under both previous manager Sam Allardyce and current boss Slaven Bilic.

He becomes the second player in as many days to sign a new deal at West Ham, with team-mate Michail Antonio having also agreed to a 12-month extension on Monday.

"I've been here for two years now and I'm looking forward to the next five seasons now that I've signed.

"Last season, especially with it being the last season at the Boleyn Ground, was pretty special, with the Manchester United game one which will live with me forever.

"This season, we're all looking forward to the new stadium that's up and running now. The first game with Juventus which is obviously going to be a fantastic day, and the season ahead."

The Hammers will play their home games at the Olympic Stadium from the 2016-17 campaign onwards.