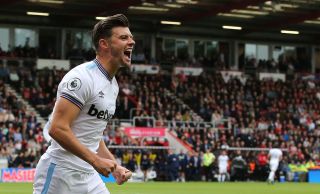 West Ham climbed to third in the Premier League after Aaron Cresswell’s 74th-minute equaliser earned a 2-2 draw from a pulsating encounter at Bournemouth.

Joshua King’s goal, which was initially ruled out for offside before the decision was overturned by a VAR, and Callum Wilson’s fifth strike in four games put the Cherries on course for victory at the Vitality Stadium after Andriy Yarmolenko’s early opener.

But left-back Cresswell extended the high-flying Hammers’ unbeaten run to six top-flight games by firing home via a deflection off Steve Cook.

The visitors, who lost goalkeeper Lukasz Fabianski to a first-half injury, move a point behind second-placed champions Manchester City.

Eddie Howe’s Cherries, a point further back, had a Nathan Ake effort chalked off for offside against team-mate Dominic Solanke at 2-1, while England striker Wilson wasted a golden chance to put the game beyond West Ham.

Both sides came into the game in the top six but on the back of embarrassing Carabao Cup exits at the hands of League One opponents.

The Hammers, thrashed 4-0 at Oxford on Wednesday, had taken 10 points from the last 12 available following last weekend’s win at Manchester United, which was earned by goals from Yarmolenko and Cresswell.

Bournemouth, meanwhile, were seeking a third successive top-flight victory to recover from a 2-0 loss at Burton.

Manuel Pellegrini reverted to the team which impressively won at home to Ole Gunnar Solskjaer’s side, while Cherries boss Howe switched back to the line-up which recorded the club’s first win at Southampton.

In-form winger Yarmolenko put the away side ahead inside 10 minutes with his third goal in four games.

The Ukrainian twisted away from Dutchman Ake in the box to curl into the left corner after Sebastien Haller superbly brought down Felipe Anderson’s diagonal pass into the box and laid the ball back.

Bournemouth forward King was denied a goal by VAR due to a marginal offside decision during last Friday’s victory over local rivals Saints. The technology worked in his favour on this occasion.

West Ham had to endure taunting VAR chants from the home fans, before suffering a further setback in the 34th minute when first-choice keeper Fabianski limped off injured to be replaced by Premier League debutant Roberto.

The goals came from two of only three efforts on target in an open and evenly-matched first half.

Bournemouth made the most their next opportunity by edging in front around 30 seconds into the second period.

Wilson calmly converted into the bottom left corner after the ball broke to him just inside the 18-yard box to claim his seventh goal in as many games against the Hammers.

Defender Ake was then denied a third after his deflected drive following a corner was ruled out for Solanke’s infringement, with the decision of assistant referee Nicholas Hopton supported by VAR.

Yarmolenko continued to cause the hosts problems as the Hammers pushed for an equaliser. The creative wide-man bent narrowly past the left post and later delivered a pinpoint cross which led to Aaron Ramsdale saving well from an Anderson header.

After Wilson wasted a golden chance to make it 3-1 by firing straight at Roberto when through on goal, the visitors levelled with 16 minutes to go.

Another dangerous ball into the box from Yarmolenko was nodded down by Anderson, allowing the onrushing Cresswell, who scored a superb free-kick last weekend, to slam home via a hefty ricochet off Bournemouth captain Cook.

Cresswell later survived a penalty appeal following a tussle with King in the box as the game ended all square.