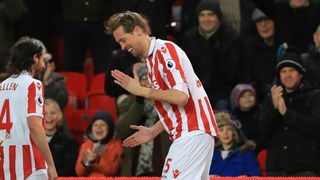 Former England striker Peter Crouch has become the 26th player in Premier League history to reach 100 goals in the competition.

The 36-year-old brought up the landmark on Wednesday, putting Stoke City 1-0 up against Everton before topping it off with his trademark robot celebration.

Crouch is the fourth slowest to 100 in terms of appearances, with midfielders Paul Scholes (436), Steven Gerrard (449) and Ryan Giggs (534) the only men to chalk up more than his 419 outings for a century.

The former Tottenham, Portsmouth, Aston Villa and Southampton striker is - at 36 years and two days - the oldest player to reach three figures in the Premier League, netting more headers (48) than anybody else.

Crouch's 37 goals in Stoke colours are his most for any club in the top flight, having only otherwise passed 20 for Liverpool.

Twelve of his 22 for the Anfield club came in 27 appearances during the 2004-05 season – Crouch's most prolific campaign of his career.

Like most strikers, he is a creature of the penalty box, with only five of his goals coming from outside the area, although he has just one converted spot-kick to his name.