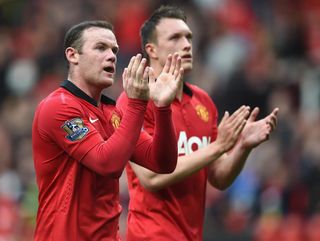 The Manchester United forward is preparing to head to his third World Cup, having carried great expectations when representing his country at previous tournaments.

But Crouch, who represented England on the biggest stage of all in 2006 and 2010, feels the inclusion of talented youngsters such as Daniel Sturridge and Raheem Sterling could ease the burden on Rooney when the competition gets under way next month.

"They (the younger players) won't have respect for people and will just go out there and do what they know they can do," he is quoted as saying in the British press. "It will certainly benefit us and Wayne.

"The last two World Cups have all been about if Rooney stays fit then we are going to win it. The pressure was ridiculous on him.

"But now we have other players in the squad.

"I can't even remember Rooney being mentioned too much in the lead up to this World Cup.

"I think taking a bit of pressure off him and letting him enjoy his football can only be a good thing.

"What is good about the squad at the minute is there are a lot of young players and it is a bit different.

"Hopefully they'll go into the tournament with less fear and the lack of experience can help the players. I genuinely do believe that. They will go out there and continue what they have been doing this season.

"Sturridge and Sterling seem to be playing with so much freedom at Liverpool and if they can take that into the World Cup with other players like Barkley and Adam Lallana - really exciting players - then I'll be excited to see them on the world stage."

England face Italy in their first Group D clash on June 14 before taking on Uruguay and Costa Rica.