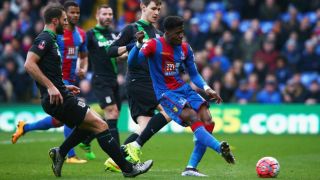 Crystal Palace snapped out of a poor run of form to claim a 1-0 victory over Stoke City in the FA Cup fourth round on Saturday, knocking Mark Hughes' men out of a second cup competition in the space of a week.

Palace had won just one of their previous seven matches in all competitions – against Southampton in the last round.

But Wilfried Zaha sealed progression in the 17th minute with the first goal by a Palace player at Selhurst Park since December 12.

New signing Emmanuel Adebayor was left out of the matchday squad as he looks to build his fitness before making his debut, but Palace had more than enough about them to overcome a Stoke side sporting eight changes to the XI that suffered League Cup semi-final heartbreak at Liverpool on Tuesday.

Zaha's goal was just reward for a strong start by the home side, who felt Stoke should have seen Marc Wilson sent off before the interval.

Stoke enjoyed a brief spell of pressure midway through the second period, but were unable to find a way through the Palace defence, leaving them to focus their attentions on achieving as high a finish as possible in the Premier League.

Palace started brightly and carved out the first opportunity when Lee Chung-yong – scorer of the late winner in a 2-1 Premier League victory at the Britannia Stadium in December - dribbled into a promising position only to drag his shot wide.

And it was the home side who opened the scoring, with Zaha dancing past two Stoke defenders before slotting beyond goalkeeper Jakob Haugaard.

Joselu represented Stoke's best attacking threat in the first half, volleying narrowly over the crossbar in the 25th minute and heading a Xherdan Shaqiri cross just wide moments later.

Wilson was perhaps fortunate to escape with a yellow card following a heavy challenge on Fraizer Campbell as the match approached the half-hour mark. And referee Mark Clattenburg drew further heckles from the stands by opting not to blow for a tackle on Yohan Cabaye, with Shaqiri eventually going on to fire just over.

As was the case for much of the first half, Palace were in control at the start of the second, and Joel Ward saw an effort bounce wide after trying his luck from distance, while Pape Souare forced Haugaard to tip over his crossbar from a Campbell strike.

Stoke raced to the other end of the pitch, where Wayne Hennessey denied Peter Odemwingie with his legs, and the combination of Shaqiri and Bojan Krkic started to poke holes in the Palace defence.

However, the pair were unable to cause Hennessey too many problems, and Zaha - in inspired form - came close to extending the lead he established with a shot across goal that snuck just wide, having almost teed up Scott Dann for a close-range finish moments earlier.