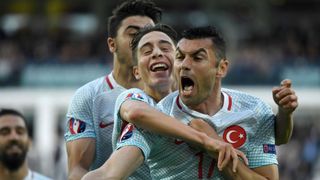 Turkey remain in with a chance of reaching the last 16 of Euro 2016 after securing an impressive 2-0 win over Czech Republic in Lens on Tuesday.

Fatih Terim's side came into their final Group D encounter without a goal or point to their name, but victory thanks to strikes from Burak Yilmaz and Ozan Tufan lifted them above their opponents and into contention for one of the third-place qualification berths.

By contrast, Czech Republic, missing talisman Tomas Rosicky through injury, are eliminated with their stirring late fightback to earn a 2-2 draw against Croatia last time out ultimately counting for nothing.

The opener arrived in the 10th minute as Burak applied the decisive touch to a sweeping Turkey move with a fine finish, before Tufan smashed home to double the lead midway through the second half.

Czech Republic struck the woodwork through Tomas Sivok shortly after Burak's effort, but Pavel Vrba's men - who knew a win would seal a last-16 spot - failed to create much else in the way of goalscoring opportunities as they crashed out.

Meanwhile, Turkey must wait for results from Groups E and F on Wednesday to see if their participation at the finals will be extended, while the result also subsequently guaranteed Northern Ireland's progress from Group C.

Terim made three changes from the meek 3-0 defeat to Spain and it was one of those, Emre Mor, who teed up Burak to break the deadlock in the early stages.

Arda Turan had come in for heavy criticism following the first two games, but it was the captain's clever pass that freed Mor, who squared for Burak to sweep home.

Czech Republic went agonisingly close to a swift equaliser when Sivok thudded a header against the base of the post from a right-wing corner.

Pavel Kaderabek brought a save out of Volkan Babacan at his near post before Tomas Necid steered an effort over as Vrba's side grew further into the contest.

Kaderabek just failed to get a telling touch on Necid's flick on the half-hour, and Jaroslav Plasil stung the palms of Babacan with a rasping 25-yard drive.

Turkey made it to the interval with their lead intact, and threatened a second just prior to the hour when Mor blazed over on the break.

Vladimir Darida and Necid brought smart stops out of Babacan as the Czechs responded, but Turkey added to their advantage in controversial circumstances in the 65th minute.

Mehmet Topal appeared to be in an offside position when a free-kick was glanced in his direction, before he laid off to Tufan, who smashed past Petr Cech at his near post from close range.

Substitute Olcay Sahan fired wide as Turkey went in search of a third late on, but there to be no more goals as Terim's men kept their hopes alive.