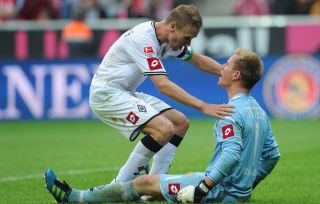 The 21-year-old goalkeeper had been linked with a move away from the Bundesliga club after playing a big part in their rise to fourth in the table.

He kept a clean sheet in their last match against Borussia Dortmund as they recorded an unexpected victory, before impressing for Germany Under-21s in their victories over Montenegro and the Faroe Islands.

Barcelona were reported to be interested in the young keeper as a replacement for Victor Valdes, but Daems wants him to stay.

"I guess it is the usual way," he said. "If you have a goalkeeper as we do, many great teams are interested in him.

"This boy has everything, charisma and lots of talent. He is a really good goalkeeper.

"He is very young and I hope he stays with us a little bit longer."

Daems also called on his team-mates to focus on their league campaign again having waited 10 days to build on their 2-0 victory over Dortmund while international fixtures came to the fore.

"Right now it is Bundesliga time and the Bundesliga is something completely different," he added. "They [their international players] were away for 10 days and now we are together again to prepare for the match against Hertha Berlin."