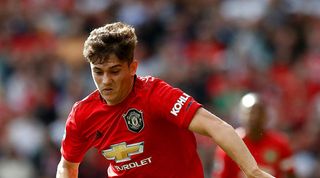 Manchester United may not have made a bright start to the season, but new signing Daniel James has been one of their bright sparks.

Speaking to the BBC, he has opened up about his start to life in Manchester and claimed: "I want to be at the club my whole career."

With the big-money signings of Harry Maguire and Aaron Wan-Bissaka over the summer, James's acquisition from Swansea flew a little under the radar.

However, the Welsh winger has been impressive, scoring three goals already so far this season having only struck five across the whole of last season in the Championship.

"I wanted to play as many games as I could but didn't think it would happen so quickly," he said. "To play here is an honour that I'll grasp every game. I've started better than I thought I would."

It's been a rapid rise for James, who in 2017 had a loan at Shrewsbury terminated early after failing to break into their matchday squad.

The following season, he asked Swansea manager Graham Potter if he could go on loan to League Two Yeovil, but Potter convinced him to stay and fight for his place.

"If someone told me I'd be at Manchester United a year later I'd tell them to shut up," he said.

On his footballing influences, James actually pointed to a former Chelsea player as someone he needs to learn from to improve his game:

"The way [Eden] Hazard was at Chelsea - his movement in behind, when to go and when to stay - he's so quick, but the way he stops people and goes, and little one-twos, getting shots off quickly is something he's done his whole career," said James.