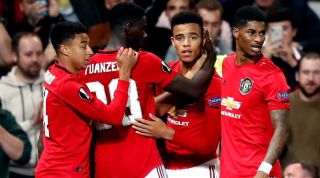 Manchester United’s under-23s team – which is full of 17-year-olds – have won seven, drawn one and lost one of their nine games so far this season. Granted they’re playing in the second tier after relegation last season (and results can be misleading at this level), but it is obvious the recent investment in the youth system is starting to pay dividends.

Promoting young players has long been integral to the history of United. The club keeps faith by offering a clear pathway to the top level. The injury-hit, one-goal-a-game, eighth-in-the-table first team team have massively underwhelmed so far, but it has given more minutes to academy graduates than any other team in the league.

After too many years of neglect, United have quadrupled the amount they’ve put into the youth system since 2015. There’s an increased games programme, too, to expose players to as many different types of football as possible: the EFL Trophy, more under-18s tournaments and even flying in opponents to play the under-19s, as United did with Hertha Berlin last week. They plan many more.

FFT went to Lincoln on Tuesday to see United’s under-21s in the EFL Trophy against a physically stronger Imps who’d won the competition in 2018.

Although League One Lincoln enjoyed most of the play against a very young United side with two 17-years-olds in central defence, they lost 0-1, with United midfielder James Garner scoring again. Playing against the first teams of third and fourth tier sides with a Wembley final is excellent for development; last season’s final between Sunderland and Portsmouth was watched by 89,000.

Several have already played in the first team.

Nicky Butt, promoted to the head of first team development, has a clear view of what needs to be done. “We have good individuals but we still have to get better teams so that we can get back to winning youth cups – which historically Manchester United did. The ultimate goal is to get players into the first team and if that’s not possible then getting players into the Football League. If you can do that by winning trophies, then it’s ideal.

United won the first five FA Youth Cups (twice against Wolves) in the 1950s with a team comprised of players like Duncan Edwards, Bobby Charlton, Eddie Colman and Billy Whelan who would become the Busby Babes.

The Class of ’92, Butt included, won it too. Yet United haven’t had their hands on the trophy since the 2011 side of Pogba and Lingard.

“We’ve been poor in the youth cup,” admits Butt. “We haven’t had the squads to challenge the Citys and the Chelseas. They had a different philosophy to ours – of going around the world and buying players to build a team.

“United’s way has been a core of local lads – which is important - supplemented by more British lads at 14, with European lads at 16/17. That’s the template and we’ve started doing that again in the last three or four years. We’re hoping to challenge for trophies soon, to catch up with the others. We’re investing well in the youth set up.”

Results have been good for United’s youth sides this season, right up to the under-23s.

“Results are not as important at 23 level, it’s more about playing the right kind of football and giving them the outlook that if they’re not going to get to United’s first team – which, being honest, not a lot of them do – how they can make a good career,” points out the no-nonsense Butt. “Players have to be adaptable because not everyone plays the Man United way.”

How would the combative midfielder who played 307 first team games for the club describe the ‘Man United way’?

“Free flowing football which is fast and attacking, fearless and brave,” says the Mancunian of a system that the 23s and the first team are trying to play, the former with more success than the latter.

“We must be able to win any way. There should be no snobbery and only playing pure football. If a team wants to run then we should outrun them. If they want to fight then we should outfight them. If they want to play then we should outplay them. I’m seeing evidence of that with the younger teams but we have to be patient. Look at our squad tonight (at Lincoln), it’s very young. We have got young lads who are going up to the first team. That frustrates the youth coaches when they lose their players, yet at the same time they are proud of their progress.”

“Ole Gunnar is passionate about bringing young players through but it’s hard to do it in a team which is struggling. Everyone talks about our decade (the Class of ’92) but it was a lot easier being around world class players who were used to winning leagues.

“You need experienced players to help young players. At the moment you are looking at Scott (McTominay) to drive the team, Mason (Greenwood) to try and get us a goal. They should be the ones coming on at 1-0, 2-0 and 3-0 and showing how good they are for the future. It’s difficult times for the manager to bring to bring young players in but he’s still been doing it and that indicates how supportive he is of the youth system.”

Greenwood, 17, became United’s youngest ever goalscorer in Europe – younger than George Best – with the only goal against Astana on Thursday. He’s scored 53 goals for the under-18s, 19s and 23s after making his debut for the U18s two years ago

Butt works closely with reserve team (that’s the under-21s for the EFL Trophy and under-23s for league games) boss Neil Wood (32), who was promoted in the summer to a position far more famous names were interested in.

Wood’s job is to help develop the boys for that moment when they go in the first team. “It’s a tough game when they get up there and there’s a big gap between the 18s and the 23s – and another big gap between the 23s and the first team. We’re trying to close that gap and nights like this (against Lincoln) help, playing in front of a crowd where there’s pressure to perform. You can’t really manufacture that.”

Wood is a Stretford lad and lifelong United fan who grew up one mile from Old Trafford who is well aware of what it will take to rebuild the youth system fully. “These things take time. You need a vision. A lot of the other clubs threw massive money at the youth system and that wasn’t the way United had done things historically, but then we started to lose players because of it. We lost good players at 11, 12 and 13 because we weren’t willing to bend over backwards to meet demands. That sets you back, but we want players who want to play here because of the history, but maybe that stopped counting for so much with younger players. The coaching has been good, the staff are good. We never stopped believing ourselves. We went through a blip but we’ve turned a corner.

“When I was coming through we had a nucleus of local Manchester lads and they were topped up with the best national lads like Darren Fletcher. There was one or two European lads who came in – Bojan Djordic for example in my age group. It’s good to have local lads who have the club in their blood – though other players can come in and buy into the club.”

Wood joined United’s academy at eight and left the club at 22 after injury hampered his chances of playing in the first team.

“I always played a year up and made my debut for the reserves at 16. At 17 I was training for the first team, me and Wes Brown. I played for England Schoolboys and felt that I had a real chance of making it at United. That was my dream. But then I had two years of injuries and that’s a long time to miss at a key age. Sir Alex [Ferguson] gave me a new contract even though I’d missed all that football but it was so frustrating. There were some dark times which toughened me mentally, yet nowhere ever felt the same after United.”

Wood has studied different coaching methods, he’s played football abroad. He’s in constant contact with Butt, Solskjaer and first team coach Kieran McKenna. They decide which players will work with the first team. The players are enjoying it too.

“We showed a lot of spirit today,” Chong told FFT after the match. “Everyone is enjoying their football and you can see that in our performances. Tonight (against Lincoln City), even though we were under the cosh and Lincoln played very good, we enjoyed our defending, enjoyed the counters. Everyone is pushing each other in training and we have some top players coming through.

Chong has learnt from playing in the first team: “tiny details along the way. They’re ambitious, confident and have character”. But he’s not getting above himself and speaks in the manner Solskjaer wants to hear all his players adopt. “I will keep working hard, keep my head down and see what comes in my path. I want to keep adding to my game, keep developing as a player.

Wood is energised by his new role and the coaching structure of which he is a part, all with that essential United connection.  “Quinton (Fortune) has come in and it has been fantastic to work with him. Nicky is working between us and the first team. It’s more streamlined now and working well. I have a good relationship with Neil Ryan (son of former first team assistant manager Jimmy) who runs the 18s, the guys in the academy because that’s where I worked for a long time.”

United’s youth system is in ruder health than it has been for years. The U18s are hitting their stride, the U17s play a year above their level. There are actually very few players in the U16 group as they’re asked to play above their level too.

There is a big U15s group and they beat Manchester City 4-0 recently. They’re playing as U16s and United hope to keep most of these players. The U14s also defeated City 4-1. City despite state of the art academy facilities don’t have a pathway for their young players into the first team and infamously lost Jadon Sancho to Dortmund.

Inevitably the results of the first team set the mood at the club. City are champions, United are not and as Butt observes, it’s not ideal to promote youngsters into a floundering first team, but the quality is there and more are waiting in the wings.

ANALYSIS Pochettino's pressure: why it's likely to get worse for Tottenham before it gets better