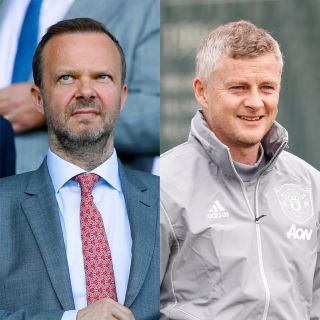 Ed Woodward has pledged his faith in Manchester United manager Ole Gunnar Solskjaer as the Norwegian bids to get the club “back to the top of English football”.

United announced record financial revenues of £627.1million for the year ending June 30, 2019, up 6.3 per cent from 12 months ago, with the new Champions League broadcasting deal swelling the figure.

However, their sixth-place Premier League finish last season saw them fail to qualify for Europe’s elite club competition, meaning turnover in 2020 is expected to drop to between £560m and £580m.

The Red Devils are already 10 points adrift of Liverpool after only six top-flight matches this term, but Woodward set out a long-term vision as he promised to stand by Solskjaer.

United’s executive vice-chairman said on the club’s quarterly investors’ call: “We and our growing global fan-base demand success. Success means winning trophies. That target and that standard has never changed for Manchester United.

“The progress we’ve made on the business side underpins the continued investment in the football side.

“Much of the progress made around that investment in the academy, the recruitment department and the training ground facilities is behind the scenes and therefore isn’t immediately apparent to those on the outside looking in.

“These investments, together with the commitment we’ve made to Ole and his coaching staff in March have given us the building blocks for success.

“Whilst we’re confident this investment will deliver results, it’s important that we are patient while Ole and his team build for the future.

“We will continue to focus on the long-term strategy and won’t be influenced by short-term distractions. We’re optimistic for the future.”

Despite a significant outlay on the likes of defenders Harry Maguire and Aaron Wan-Bissaka and winger Daniel James over the summer, United’s inability to replace striker Romelu Lukaku has been scrutinised.

The three additions and a number of first-team players signing new contracts means United’s wage bill reached an eye-watering £332.3m, an increase of £36.3m on the previous year and accounting for 53 per cent of their turnover.

While they are yet to appoint a director of football, Woodward said: “Regarding the speculation around the head of football, we’re continually reviewing and looking at the potential to evolve our structure on the football side.

#MUFC executive vice-chairman Ed Woodward: "We remain focused on our plan of rebuilding the team and continuing to strengthen our youth system, in line with the philosophy of the club and the manager"— Simon Peach (@SimonPeach) September 24, 2019

“Much of the speculation on this type of role focuses purely on recruitment, an area we’ve evolved in recent years.

“We feel that the players we’ve signed this summer demonstrate that this approach is the right one.

“Returning to the roots of our club’s ethos of youth-led, attacking football is the right way forward and everyone at the club: the board, the manager, the squad and all of the staff remain resolute in our desire to get Manchester United back to the top of English football.

“We’ll continue to make the necessary investments to make this happen across our first-team players, our academy and our recruitment department. This long-term approach to building a squad is the right one.”

United’s accounts showed that operating profit is up to £50m, while the net debt has come down to £203.6m.