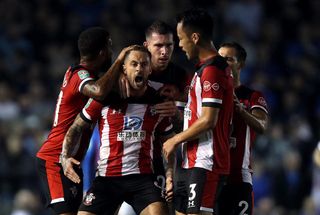 Danny Ings wrote his name into Southampton folklore by netting twice against Portsmouth and inspiring his boyhood club to a thumping first victory at Fratton Park in 35 years.

Anticipation has been rising since the Carabao Cup third-round draw threw up the first south-coast derby since 2012, with Saints making the short journey along the M27 as favourites against the League One strugglers.

Ings helped his hometown team do the business on Tuesday, with his double complemented by second-half strikes from Cedric Soares and Nathan Redmond as Ralph Hasenhuttl’s side sealed a 4-0 victory against Portsmouth.

Hampshire’s largest ever football policing operation was in place for the clash of these old foes, with a febrile atmosphere welcoming the sides as under-fire Kenny Jackett saw his side start the cup clash on the front foot.

John Marquis saw an early effort clip the post and Pompey somehow failed to score from a corner moments before Saints struck against the run of play.

Boyhood Pompey fan James Ward-Prowse fed Southampton supporter Ings, who scored from the edge of the box and rubber-stamped his place as hometown hero by clipping home a second just before half-time.

Ings remained a thorn in the side and his hard work led to Cedric’s third, with substitute Redmond adding gloss as Saints ended a 14-year wait for a win against their rivals in style.

Many predicted this outcome, but Pompey’s start belied their poor form and Marquis clipped the post from 25 yards in the ninth minute.

Pompey continued to push as Brett Pitman saw an effort deflected just over and then Alex McCarthy helped deny him in a melee from a corner just before Saints landed a sucker punch.

Craig MacGillivray denied Ings’ initial attempt but Ward-Prowse was first to the loose ball and played it back into the striker, whose superb first touch took him between two Pompey players before firing home a low shot from 20 yards.

Ings, Pierre-Emile Hojbjerg and Ward-Prowse all tried to add to that 21st-minute opener, which would arrive on the stroke of half-time.

Che Adams read a loose Pompey pass and Saints poured forwards, with Michael Obafemi sliding a lovely ball for Ings to clip over the goalkeeper. He made the most of his celebrations.

Play became stretched as the Fratton Park faithful roared their side on and Saints grabbed a third as Ings’ fine work led to the ball falling for Cedric to slam home in the 77th minute.

The 1,981 visiting fans’ enjoyment went up another notch as Redmond scored a classy fourth in the 86th minute from 20 yards.