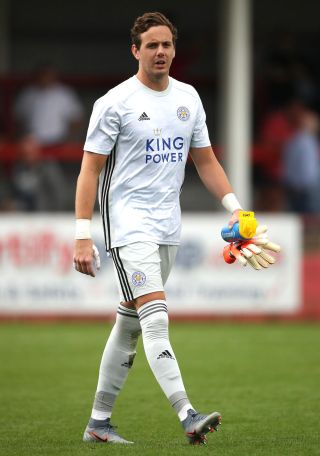 Leicester goalkeeper Danny Ward made the most of his opportunity as he shone in the Carabao Cup win at Burton.

The 26-year-old was making only his second appearance of the season on Tuesday night but he did not disappoint when called up on in the 3-1 victory.

He made a handful of fine saves to deny Burton and preserve the Foxes’ lead when they were under pressure from their League One opponents in the second half.

One save in particularly caught the eye when Ward tipped a fiercely-struck volley from Scott Fraser over the crossbar from point-blank range with the score at 2-1.

Leicester assistant manager Chris Davies said: “That was an excellent save – a real reaction save. It was a crucial save in the game and he came in and played well.

“He’s good at decision making and has good quality on the ball, and that save was a big save. That’s what you need your goalkeeper to do.”

Kelechi Iheanacho, Youri Tielemans and James Maddison were on the scoresheet but Davies felt the team could have been more clinical in front of goal.

“Obviously, from our point of view, the objective was to get through in the game, which we did,” he said.

“But we could have scored more goals and been a bit more clinical with our attacking play. We lacked a little bit of aggression in certain moments and they managed to get their shot off and score their goal.

“We always felt that we were going to create more chances and we did do that, but we weren’t quite clinical enough in those moments – either breaking away or when we had possession. In general, though, we are happy to go through.”

Leicester were two goals up after 20 minutes minutes and Burton boss Nigel Clough, who guided the Brewers to the semi-finals on the competition last season, felt his team paid for their slow start to the match.

“We gave them too much respect in the first 10 or 15 minutes. The speed and the quality of the attacks is what does it and what makes them top players and they can hurt you,” said Clough.

“It was something we talked about and said we couldn’t afford to do. You need to make it as uncomfortable as you can for them. We did that for 75 minutes, but not the whole game.”