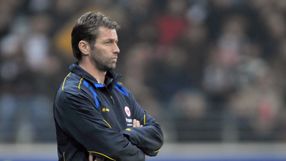 Frankfurt, who are just three points off the relegation play-off after snatching only their first win since the winter break over fellow strugglers St. Pauli last week, said the bad run of the past few months was decisive in their decision.

"We took this step because we showed clear weaknesses in the second half of the season," club boss Heribert Bruchhagen told reporters. "It is a decision out of responsibility for the club. We believe we can still stay up with the new coach."

Daum, whose last coaching job was at Turkish club Fenerbahce after his surprise departure from Cologne in 2009, will lead his first training session on Wednesday.

"I want to create an atmosphere of optimism," Daum told the Koelner Express newspaper. "I am not a firefighter but a coach with a concept. That is why I don't think about the second division."

Daum has solid Bundesliga credentials, having led VfB Stuttgart to the title in 1992 and having also coached Bayer Leverkusen and Cologne twice.

He lost out on the Germany coaching job that was waiting for him after he tested positive for cocaine in 2000 and subsequently left for coaching stints in Turkey and Austria before returning to Cologne in 2006.

Skibbe's departure is the latest in a series of coaching changes in the Bundesliga with Germany coach Joachim Loew warning it could hurt the Bundesliga's image.

In the past 15 days alone Bayern Munich, Schalke 04, VfL Wolfsburg, Bayer Leverkusen, Hamburg SV and Freiburg have already changed or have announced they will change coaches at the end of the season

"I am very disappointed. I thought we could also win against VfL Wolfsburg," Skibbe told Germany's Bild online.