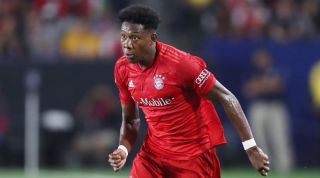 The Camp Nou club want to sign the Austrian to provide competition for left-back Jordi Alba, according to ESPN FC sources.

Alaba’s representatives offered the versatile defender to Barça a few weeks ago and the 27-year-old is now considered a top target for the La Liga club.

Alba is currently the only left-back in Ernesto Valverde’s squad, while Alaba's’s experience and ability to play in a variety of roles, including centre-back, make him an attractive proposition.

"The player is interested in coming," a Barça source is quoted as saying.

"It's a complicated operation, but not an impossible one."

Bayern are likely to drive a hard bargain for Alaba, who has two years remaining on his contract, despite the player’s eagerness to make the move happen.

Max has been tracked for the last year by Barcelona, but they could face competition from Borussia Dortmund.

Junior could be allowed to leave Betis for less than his €40 million release clause, but he is considered the third-choice option by the Catalans.

WANTAWAYS 8 players who were bigger than the club (or thought they were, anyway)