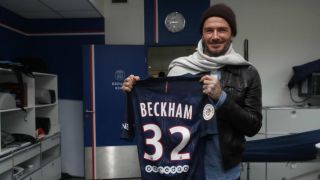 David Beckham has returned to visit former club Paris Saint-Germain and meet up with many of his former team-mates.

The former England captain played for PSG in 2013, his final club before retiring from football and ending a glittering career.

Beckham, 41, is back in the French capital to conduct an interview with the club's television channel, but he also took time to pose for photos and visit the dressing room.

PSG released photos of Beckham after he was presented with a number 32 shirt – the same number he wore in his PSG playing days - and posted a message reading "Welcome back David".

Beckham was also shown meeting up with captain Thiago Silva, Maxwell and Javier Pastore, all of whom were at the club during his spell.

"It is great to be back in Paris," Beckham said.