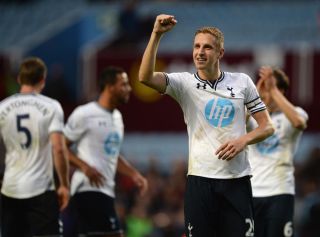 Tottenham captain Dawson was hurt in his side's 4-0 defeat to Chelsea on March 8 and has since made only one appearance, as a first-half substitute against Liverpool at the end of last month.

The 30-year-old has played a full part in training this week, however, and will travel to the Britannia Stadium to face Mark Hughes' side.

"Michael has made good progress and will be in the squad," confirmed Tottenham head coach Tim Sherwood.

Mousa Dembele is rated doubtful due to an ankle problem, while fellow midfielder Etienne Capoue will not feature despite returning to training following a two-month absence.

Tottenham visit a Stoke side who have won five of their last six matches on home soil and beaten Chelsea, Manchester United and Arsenal at the Britannia Stadium this season.

The reverse fixture saw Stoke beaten 3-0 at White Hart Lane, but Sherwood anticipates a much trickier test this weekend.

He added: "It's always tough at Stoke. They've picked up of late and will be a different proposition to the team we played earlier this season.

"Stoke have taken some big scalps at home and we don't want to be added to that list."