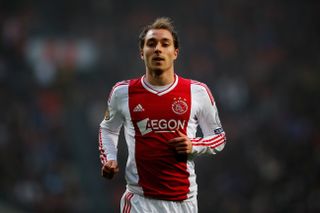 The Denmark international is believed to be on the verge of joining Andre Villas-Boas' side and De Boer is confident that the 21-year-old has the attributes to make an impact in England's top flight.

When asked whether the midfielder could transfer his talent to the English game, De Boer told De Telegraaf: "It would surprise me if that won't happen."

Eriksen scored nine goals in the Eredivisie last season as Ajax won the title and De Boer admitted that his decision to leave would represent a huge blow.

"His departure will be an enormous loss, Chris was very important for us," he continued.

"We always have worked in a good way. Players who are that good and also the ideal professional are, for a coach, the most ideal players."

If Eriksen were to complete his move to White Hart Lane, he would become Villas-Boas' fifth signing since the end of last season.

Roberto Soldado, Nacer Chadli, Paulinho and Etienne Capoue have all been added to Tottenham's squad since the club missed out on UEFA Champions League qualification in May.