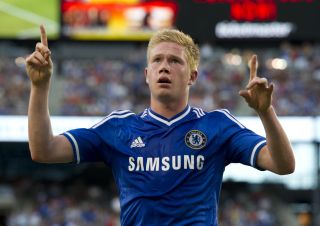 The Belgian is reportedly on the verge of a move to Wolfsburg in the Bundesliga, following a two-year spell as a Chelsea player that has seen him fail to break into the first team.

De Bruyne, signed by Chelsea in January 2012, was immediately loaned back to Genk upon his arrival at Stamford Bridge and also spent a season with Werder Bremen, but now looks set to make a permanent move away.

"Kevin De Bruyne is more than probably leaving," said Mourinho. "It's not closed but it's close."

The Portuguese manager's comments follow claims by Wolfsburg general manager Klaus Allofs that the clubs were nearing an agreement.

He told Wolfsburger Nachrichten on Sunday: "It's not that we can confirm the deal just yet, but we are no longer so far apart with Chelsea that we can't bridge the differences."