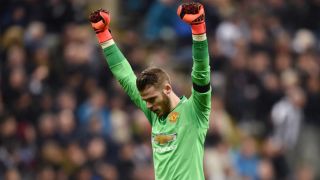 The 25-year-old shot-stopper reached the milestone in Tuesday's 3-3 Premier League draw at Newcastle United, having arrived at Old Trafford from Atletico Madrid in 2011.

As well as reflecting on United's decision to sign the keeper as a 19-year-old, Steele predicted the Spain international will get significantly better in the years ahead.

"He has got the potential to be a great like Peter Schmeichel and Edwin van der Sar," Steele told United Review.

"The boy could be held in that regard because he is only going to get better. He came to United at 19, so you are looking now at a mature, physically developed goalkeeper.

"He has got better and he is going to get even better. He is 25 now. Schmeichel didn't go to United until he was 28, so this boy – this man, now – has got so much more to come."

On the decision to sign De Gea, who Steele watched while the keeper was playing for Atletico, he added: "Ultimately he was very well scouted and the decision was made by the main man, the manager [Alex Ferguson].

"We bought young potential. Sir Alex was never afraid to bring young players into the club and blood them by putting them into the team. In terms of a goalkeeper, that is what we did for the first time with David.

"There is always a chance being taken while you are scouting, but I saw David in the Europa League semi-final at Liverpool and that clinched it for me. He was phenomenal.

"He did things in the first 25 minutes of that game that made my mind up. I could have left after half an hour with the decision made. You think of the atmosphere, the state of the game - he didn't look an 18-year-old lad.

"He is a very special talent in the goalkeeping world. We looked all around the world for a replacement for Edwin, but we always came back to David."