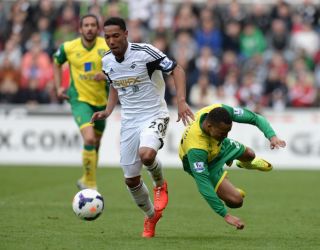 De Guzman, on loan from Villarreal, scored twice in the morale-boosting win for Garry Monk's team, who claimed their first victory since beating Welsh rivals Cardiff City by the same scoreline in February.

After scoring three goals in the month of March, De Guzman is now dreaming of making the trip to Brazil to face the likes of Spain, Chile and Australia in Group B, despite not making Louis van Gaal's most recent squad to face France on March 5 - a game the Dutch lost 2-0 in Paris.

"You know people are watching so you want to put on a good performance. I'm trying my best, trying to get that spot," said De Guzman, who has eight international caps to his name.

"I was left out of the last squad but hopefully this sort of form will help.

"It's a motivation for me. The coach told me I'm not forgotten but I know things haven't been going well at Swansea so it's another motivation to work harder. I just have to let my feet do the talking.

"It's hard not to have the World Cup in your mind. Everyone's reminding me, family and friends, everyone wants me to be out there. Hopefully I can make it.

"Everyone enjoys scoring and I was happy to help the team out. I've moved a bit further forward, the coaches have been telling me to get closer to the goal and shoot more and it's paying off."