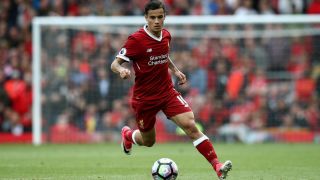 The clock is ticking for clubs across Europe looking to strengthen before the transfer window closes.

As the scramble for last-minute signings intensifies, there are several headline deals nearing completion and here are five of the biggest to keep an eye out for.

It has been a rapid rise to stardom for Kylian Mbappe, who is primed to swap Ligue 1 champions Monaco for runners-up Paris Saint-Germain.

The 18-year-old, who is also on Real Madrid's wish list, is set to join Neymar at the Parc des Princes in a loan deal that will be made permanent ahead of next season - making the France international the world's second most expensive player behind the Brazilian.

Mbappe's rapid pace, smooth technique and clinical eye for goal have drawn numerous comparisons to Thierry Henry and the expected €180million price tag will only intensify the pressure on his young shoulders.

In a transfer window of enormous fees, another mega-money deal that could still be completed is Philippe Coutinho's switch to Barcelona.

Liverpool have stood firm in their attempt to retain the Brazil international's services, but the lure of the Camp Nou is strong indeed.

Spain's transfer window does not close until Friday, so it is a while yet before the Anfield faithful can relax.

Arsenal's bid to keep hold of prized asset Alexis Sanchez could prove in vain, with Manchester City reportedly readying a last-ditch bid for the Chile international.

Gunners boss Arsene Wenger has been insistent the forward will remain, but the club's poor start to the Premier League season has not aided their cause in keeping the likes of Sanchez happy.

City look much more capable of meeting the 28-year-old's ambitions to win silverware, but time is running out for Pep Guardiola to land his man.

Amid interest from Chelsea, Alex Oxlade-Chamberlain's most likely destination appears to be Liverpool.

It was reported the 24-year-old had rejected a new Arsenal contract worth £180,000 per week as the England international seeks a new challenge.

With a medical thought to have taken place already, Oxlade-Chamberlain does indeed look to be bound for Merseyside.

He was one of the stars of Leicester City's remarkable title-winning campaign in 2015-16, but the Foxes' return to the more likely role of Premier League also-rans has left the Algerian restless.

Barcelona's primary target may be Coutinho, but Mahrez could be the one to soften the blow if that deal should fail to materialise.

Roma and several English clubs have also been credited with an interest in the winger.