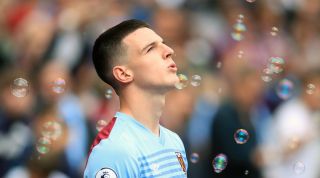 The England international has been linked with a move to Chelsea, but Merson believes the Gunners would benefit from his presence.

Rice has impressed since making the breakthrough at West Ham in 2017/18 and has been tipped for a bright future by those who have worked with him.

And Merson thinks Arsenal require a player in his mould if they are to begin competing towards the top of the Premier League once more.

"Chelsea have been linked with him, but I don't know why Arsenal aren't looking at Declan Rice," he told Sky Sports.

"Arsenal are crying out for a holding midfield player. They don't need a midfielder who's going to be on the edge of the opposition box, they need a disciplined defensive midfielder, who is going to sit in front of the back four and organise the side; one who, when he gets the ball, gives it simple with 10-yard passes.

"It's such a hard job and that's why I can't believe Arsenal aren't going in for a player like Rice.

"A player like Rice can allow the attacking players to flourish and it gives the central defenders the chance to be better than what they are.

“I don't care who you are in football, Paolo Maldini, Franco Baresi, Alessandro Costacurta and even a Virgil van Dijk, if you've got people running at you left, right and centre every minute, they are going to go past you on occasions.

“Arsenal haven't really had a disciplined defensive midfielder since Gilberto Silva. Everyone talks about the club never really replacing Patrick Vieira, and of course, but they never replaced Gilberto either.

“There are players in the current team that are meant to do that job but they don't have the discipline to do it, and that needs addressing.”