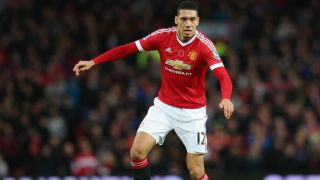 Chris Smalling insists Manchester United still have everything to play for in the Premier League this season following their 2-1 win over Swansea City.

Louis van Gaal's side ended a run of eight games without a victory in all competitions thanks to goals from Anthony Martial and Wayne Rooney either side of Gylfi Sigurdsson's header at Old Trafford on Saturday.

United's poor run over the past six weeks has seen them slip out of the top four and even with that drought-breaking win they are nine points behind leaders Arsenal.

Smalling though believes the unpredictable nature of the campaign to date means his team are still in with a shot at lifting the title.

"December was a poor month and it's a great feeling to get that win," he told MUTV. "I think, especially in the last couple of games, we've fought hard and we need to kick on like we did today.

"As players, we knew we had to stop that run and get on the front foot. We did that today and then, in the second half, they tired because we really did press them. It was a good start to the year and we can't afford any more slip-ups now, so we need to make sure we keep playing like this.

"In Monday's draw [against Chelsea], that was a game where we had to dig in and we didn't quite get what we wanted. In the second half today, we played far better, dominated more of the game and really kicked on and showed that grit and desire that we've got to show in games.

"They were two well-worked goals and to see your two strikers get on the scoresheet is good. Hopefully with the number of chances we've created today, and in our previous games as well, it's only time before the goals will start coming and, fingers crossed, they'll come now.

"We've dropped far too many points for our liking. Luckily, this league is so up in the air it's everything to play for. If we can get on a consistent run now then we can start looking up that table."

Martial set up Rooney's fine winner after opening the scoring with an emphatic header, and Smalling has hailed the attacking qualities of the young France international.

"He's come in and obviously had a lot of pressure but you can see right from the off he's not afraid to be direct, get at people, use his pace and his tricks," he added. "He's a terrific player and I'm glad we've got him."