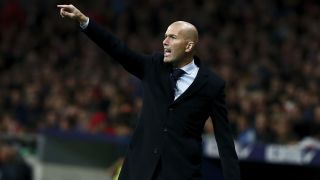 Real Madrid coach Zinedine Zidane has hit back at critics "who say everything has gone to s***" at the club.

The Spanish and European champions' stuttering season saw them stumble again in LaLiga's title race on Sunday, when they were held to a 2-2 draw by Celta Vigo.

With leaders Barcelona now 16 points ahead of Los Blancos in the table and a daunting Champions League last-16 tie with Paris Saint-Germain to come, pressure on Zidane's position has been mounting despite his success during his two years in charge.

The former France star was also late for a news conference on Tuesday after Madrid training was delayed due to lengthy talks between the coaching staff and players at Valdebebas.

Zidane, however, insists his side will get back on track with collective hard work and is adamant there are reasons to be positive for the rest of the season.

"I'm not going to tell you what we talked about. These are discussions that happen in a team," he said.

"You can analyse it as you like, that it's a moment of crisis or not, but we're here to find solutions.

"I'm not going to go into the details. When there are things like we're going through, where things aren't going as we want, it's about work. I always believe in that.

"What we have to do is work harder than ever, in every sense. It's not a physical thing, or more in our heads. It's a bit of both.

"What you tell me is what a lot of people think: that there are people who are bad and I have to get them out of the team. It's the opposite.

"When a player is bad, I will help him. I'm more interested in unity. I'm not someone who, when things are going wrong, will throw one or two into the s***. We're all in the same boat.

"It's everyone's fault, mine first. We've had two spectacular years; thank you for saying so. It's important people don't forget that.

"There are people who say everything has gone to s***. No. The day of the Celta game, I focused on the good things.

"Are things more complicated with a draw? Yes. The second half was not good, but we're not going to go crazy about it. We're going to think that, with work, we will achieve good things."

The Celta draw has led to further calls among supporters for Madrid to sign reinforcements in the transfer window, but Zidane remains insistent he does not want any new players this month.

"I don't need anyone. That's it. So that I can be clear: I don't want anyone. Period. We began with a squad and I believe in my players," he said.

"There are tough moments in a season. You want to transmit that it's unlike it's ever been before. That's not what I think. What I think is that we have everything to move forward. Everything.

"We'll see what happens at the end of the season. That's when things are analysed, and if you should make changes, you make changes."

Madrid face Numancia in the second leg of their Copa del Rey last-16 tie on Wednesday, having claimed a 3-0 win in the first meeting.