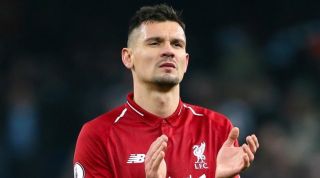 Dejan Lovren has revealed that Liverpool refused to let him leave the club this summer because they didn't want to loan him out.

The Croatia international has fallen down the pecking order at Anfield in the last 12 months, and the Reds were willing to sell him for £13.9m before the European transfer window closed on Monday.

Serie A duo Milan and Roma both expressed interest in the centre-back, but the latter were only willing to take him on loan.

Liverpool eventually broke off from negotiations after growing frustrated with the Giallorossi’s attempts to land Lovren on the cheap.

“Yes, I did consider the move,” the former Southampton stopper told Sportske Novosti. “I knew I gave my best for Liverpool and won the Champions League, and I'm not kind of player that likes to be benched and earn money.

"Yes, some people around me advised me, 'What do you care, you are in big club, shut up and take the money', but I'm not happy sitting on the bench. Milan contacted me but Roma was most persistent, but the negotiations didn't go well. I don't want to go somewhere and prove to someone who I am and how I play, and if I'm ready or not.

"I'm a professional, I've won the Champions League, won a World Cup silver medal, I achieved big things in football and don't deserve to go anywhere on loan and to have someone checking me and my quality.

"I feel very happy because all the time I felt Liverpool were with me, and I respect that a lot. [Jurgen] Klopp told me: 'Listen, buddy, you are a top-class player, we will not let you go on loan. We need you.'

"When he told me that, it was unclear to me because I know I'm currently in the worst position of all centre-backs in the team. But there will be a lot of matches, and some injuries are possible too. I wanted to leave, it didn't happen, I was told Liverpool need me and I accepted that. It wasn't meant to be for me to leave.

"I feel I'm in my prime age, in great shape, mentally ready and you cannot buy experience. Not many players have played in the World Cup final and Champions League final like me. That's why Liverpool wouldn't let me go on loan. You have to pay to get quality and not go somewhere and prove something to someone."

Lovren, who is under contract at Anfield until 2021, has yet to make an appearance for the Reds this season.