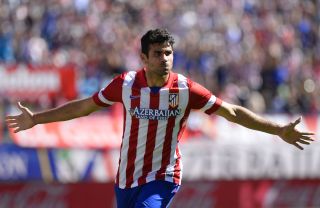 The Atletico Madrid striker made two friendly appearances for the Brazil national team in March, but is thought to be keen on featuring for reigning world champions Spain.

Costa - who has lived in Europe since 2006 when he signed for Braga - is still eligible to switch allegiances as a player's international status is not set until they feature for their country in a competitive senior fixture.

Del Bosque has been impressed with Costa's impressive start to the Liga campaign, that has seen him top the goalscoring charts with 10 goals in eight fixtures.

Spain were hopeful of including the 25-year-old in their squad for the FIFA World Cup qualifying fixtures with Belarus and Georgia, but are still awaiting Brazil presenting FIFA with a certificate declaring he has not featured in a competitive match.

And speaking after the 2-0 victory over Belarus in Group I on Friday, Del Bosque said he would respect any decision Costa makes.

"We have already spoken with Diego Costa as you know," he said.

"Everything has been made clear but he has the option of picking the national team he wants. We are happy to help him to do whatever he wants to do. Whether he feels Spanish or Brazilian, it is his decision to make."

Spain completed their FIFA World Cup qualifying campaign with a comfortable 2-0 victory over Georgia on Tuesday.

It means Del Bosque's side finish Group I undefeated with six wins and two draws, and he is happy with the balance in his team ahead of next year's tournament in Brazil.

He added: "We have a large squad full of very good players with very little difference between them, and that has helped us not lose that hunger to win every game.

"I thought the pace of our game was better and as a result the movement of the ball was almost perfect, with good interchange from one side to the other. We played with a lot of depth and dealt with all their counter-attacks well."