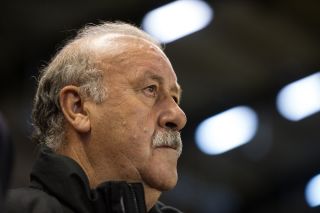 Del Bosque's current deal expires after next year's tournament in Brazil and his future has been the subject of much speculation in recent times.

And the former Real Madrid coach is set to remain in the post until after the 2016 European Championship, having guided Spain to the top of Group I to ensure they will get the chance to be crowned world champions once again next year.

"We are agreed," Del Bosque, who was appointed Spain coach in 2008, told Television Espanola.

"We get on very well. I really think highly of the national team, the federation, the directors and we are happy, that is the truth."

However, Del Bosque is mindful that his future could depend on his side's performance in Brazil.

"But we have to be very careful as there is a long way to go, and then the World Cup, where things might not go as we think," he added.

Brazil-born striker Diego Costa's possible inclusion in Del Bosque's squad for the tournament has been the subject of much debate.

The Atletico Madrid man has dual-nationality after spending more than five years in Spain and has expressed his wish to represent his adopted homeland.

Brazil boss Luiz Felipe Scolari named Costa in his 45-man shortlist for the World Cup, but Del Bosque is hopeful the situation will be resolved soon.

"We held a conversation with him. He expressed his desire and is in a difficult situation because Brazil also wants him," Del Bosque explained.

"In the coming weeks we will know something."