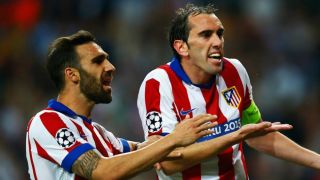 Vicente del Bosque said he was "surprised" to see not one Atletico Madrid player make the 2015 FIFPro World XI.

In every year since 2005, over 40,000 professional footballers worldwide pick one goalkeeper, four defenders, three midfielders and three forwards to decide who makes the best team of the year.

The best 11 are then announced at the Ballon d'Or ceremony in January.

This year, eight out of the 11 were from La Liga, but featured no Atletico players.

Only one Atletico player has made the XI in recent years – Radamel Falcao in 2012 - despite the club winning La Liga and making the Champions League final in 2013-14.

And Del Bosque said he could not believe Atletico were snubbed once again, especially with the likes of Diego Godin and Antoine Griezmann establishing themselves as world class players in their respective positions.

"I was surprised to see no Atleti player in the best XI of FIFPro," the Spain coach told Radio Marca.

Atletico are atop La Liga at the halfway point of the season and will face PSV in the round of 16 in the Champions League.