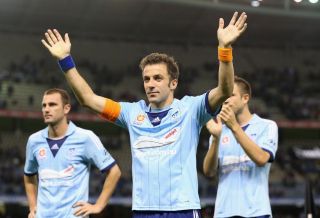 The former Juventus great has been linked with the recently vacated coaching position at the A-League club after Frank Farina's sacking.

Del Piero, 39, and the club are looking to continue their relationship, but it remains unclear in what way.

After 24 goals in 48 games, which saw him finish as the club's top goalscorer in both of his seasons, Del Piero offered his thanks in a farewell message posted on his website.

"My adventure with Sydney FC is about to be concluded, and, even if it makes me rather sad, because I have had wonderful time here, I have communicated my decision to the club.

"I'm really grateful for the last two years and for the club's request for me to remain and with whom, I am happy to explore new opportunities to continue our relationship.

"It hasn't been an easy choice, also because my life on and off the pitch has been fantastic, my family and I have really enjoyed these two wonderful years.

"Australia will remain in our hearts forever."

Del Piero will captain the A-League All-Stars in an exhibition match against Juventus in August, while he is also an ambassador for the 2015 AFC Asian Cup to be held in Australia.

He may continue his playing career elsewhere after being linked with several moves earlier this year.

Sydney FC chairman Scott Barlow said Del Piero's signing was the biggest in Australian football history, and is hoping their relationship can continue.

"Today is bitter-sweet," Barlow said in a statement.

"While we would have liked to see Alessandro remain at Sydney, his decision now allows us to further our discussions about some exciting new opportunities for our ongoing relationship and to build on the legacy that has been started.

"On behalf of everyone at Sydney FC I would like to say thank you to Alessandro for the enormous contribution he has made to our club over the last two years.

"It has been a pleasure and a privilege to have him at our club and we look forward to seeing him in the near future when he is next back in Sydney."