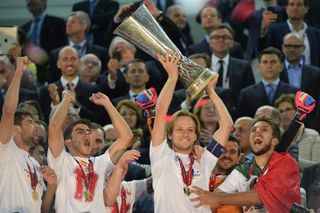 The Croatia international was named man-of-the-match at the Juventus Stadium after Sevilla claimed a 4-2 penalty shootout win over Benfica when Wednesday's final finished goalless.

Rakitic, 26, has been linked with a move away from the La Liga side throughout the season but he was unwilling to discuss his future after the European success.

"Let me enjoy and let this all die down a bit, there are so many emotions right now," he told a news conference.

"I want to finish La Liga well and prepare for the World Cup."

Kevin Gameiro struck the decisive penalty for Sevilla in the shootout after goalkeeper Beto had kept out efforts from Oscar Cardozo and Rodrigo.

Rakitic paid tribute to the club's fans and said they deserved the title.

"We have suffered a lot and left all our strength on the pitch, we feel an amazing joy," he said.

"When you score the last penalty, everything goes and you don't know what to do.

"We must thank all the fans that have supported us. Sevilla deserve this title."

The championship was Sevilla's third in nine years in the Europa League and its predecessor, the UEFA Cup, after the Spanish club won consecutive titles in 2006 and 2007.