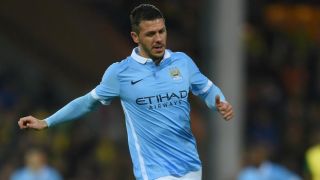 City currently find themselves three points behind top two Arsenal and Leicester City, but Demichelis believes his side is well poised in what is promising to be a tight finish after Wednesday's 0-0 draw with Everton.

"I think it was important Arsenal didn't win and we are just three points behind the leaders," the Argentina international said.

"We must continue the fight until the end and we have a lot of games to recover three points, but we need to win as soon as possible.

"Arsenal have a game at Stoke - it is a difficult game - so we have a chance to recover these three points. If we continue playing like in the second half I think we will win the next game and then the next."

Demichelis continued: "I think we tried everything to win the match but the goalkeeper for Everton and their complete team defended really well.

"So we are unhappy we didn't win, but the positive was we did not concede a goal. I think we are in a good way and we must continue playing as we did in the second half."