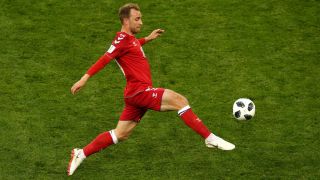 Denmark will "struggle" if Australia can stop Christian Eriksen at the World Cup and William Kvist's injury is a blow, according to Michael Jakobsen.

Eriksen is undoubtedly his nation's key player and the Tottenham star set up Yussuf Poulsen's goal in his side's 1-0 win over Peru in their Group C opener.

The 26-year-old is set to again shape as a threat when Denmark face the Socceroos in Samara on Thursday.

"If they can eliminate him from the game, Denmark will struggle," he told Omnisport.

"He is the key to the majority of the offensive part."

Jakobsen also pinpointed Pione Sisto as a key for Denmark, saying the Celta Vigo attacker could be a "massive threat".

However, Jakobsen noted that the loss of midfielder Kvist – who broke his ribs against Peru – is a hindrance to how Denmark want to play.

"They don't have anybody who can go into that position and fill it like he does," the five-time Denmark international said, having suggested Chelsea defender Andreas Christensen could move into midfield.

"He's not the best with the ball and he plays a lot backwards and sideways, but in the defensive organisation, he's very good to cover the back line."

Jakobsen believes France – who beat Australia 2-1 in their opening game – will win all three of their group matches.

As for whether Denmark would finish second, the 32-year-old said: "I was convinced before the tournament started, but I'm not that convinced anymore."