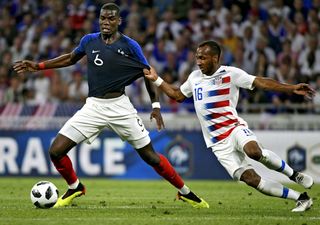 Marcel Desailly says Paul Pogba will have to play as a holding midfielder if France are to have a successful World Cup.

The 25-year-old operated in a variety of defensive and attacking roles for Manchester United last season, but has been crticised for his lack of consistency.

Critics have debated Pogba’s best position, with his most eye-catching display coming in the 3-2 win over Man City, as he scored two goals from advanced midfield positions.

However, Desailly, who won the World Cup with France back in 1998, believes there are other players better equipped to provide France’s firepower in the final third.

“He will definitely start, Didier Deschamps is a big fan of his talents but he has to play a very specific role for France if he is to be effective,” Desailly told FFT.

“He has to accept that France need him to play as a holding player who wins the ball and plays simple passes. They have three attacking players – Mbappe, Griezmann and Dembele, who will score goals and be creative in the final third; he can’t be that player if France are to function best as a team.

“He has scored goals from midfield for Manchester United but that won’t be the role Deschamps wants him to play at the World Cup.”

France head into their first World Cup game against Australia on Saturday boasting arguably the tournament’s strongest squad and Desailly believes the class of 2018 is just as talented as the team who won the trophy 20 years ago.

“It’s an exceptional squad,” he continued. “If you take Zinedine Zidane out of the 1998 squad, we didn’t really have the star players that we have now.

“Of course, players like me, Emmanuel Petit and Robert Pires were playing for big clubs and were important players but we weren’t necessarily recognised as world stars like Antoine Griezmann, Paul Pogba and some of the other players. Individually I think the current squad is possibly better.”

McDelivery from Uber Eats is helping Andrea Pirlo find a team to support this summer, join in on social media with #TeamForPirlo