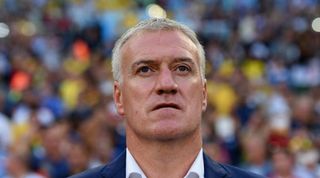 Deschamps guided France to the quarter-finals in Brazil in his first major tournament in charge before succumbing 1-0 to eventual winners Germany in the last eight.

Attention now turns to Euro 2016, which France have already qualified for as hosts.

Therefore Deschamps' men will not have any competitive matches prior to their quest to win the European title on home soil.

However, the 45-year-old has rejected the chance to experiment with his squad, instead choosing to stick with the majority of the players that earned praise for their performances at the World Cup.

Both of Deschamps' changes have been enforced upon the former Marseille coach, with goalkeeper Steve Mandanda stepping in for the now retired Mickael Landreau, and striker Alexandre Lacazette coming in for Olivier Giroud, who could be out until the new year with an ankle injury.

Mandanda's call-up offers him the opportunity to prove himself on the international stage again after he missed the World Cup due to a cracked vertebra.

Meanwhile, Lacazette is in contention to win only his third France cap after a strong start to the new campaign that has already seen him score three goals for Lyon.