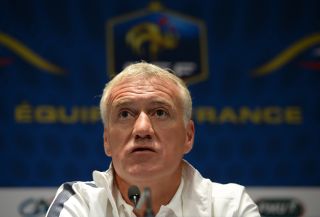 Deschamps' men take on Australia at the Parc des Princes in a warm-up ahead of their final FIFA World Cup qualifier against Finland on Tuesday.

France are currently level on points with leaders Spain, who have played a game less, in Group I, meaning the play-offs look a likely route to the finals in Brazil next year.

Deschamps explained the likelihood of fielding an experimental side on Friday, adding that players still have opportunities to force their way into his side.

"Best XI? That can also evolve," the Associated Press quoted Deschamps as saying.

"Some choices are more difficult in one or two positions, three maximum."

Asked whether fringe players could break into his plans, he responded: "Yes, why not? It's obviously better for them to play well (against Australia) and on Tuesday.

"I have the chance to make six changes in the first match, and give people a game.

"It will come into my mind when I make my choices. Of the 23, most of them will get to play. They won't be two identical teams, but I'm not going to make 11 changes (for Finland), either. You still have to keep the spine of the team."

One area where Deschamps has a big decision to make is up front, with both Karim Benzema and Olivier Giroud in contention to lead the line.

The Arsenal forward has been in impressive form at club level and started France's last qualifier - a 4-2 win over Belarus.

Benzema, meanwhile, has not scored for his country since June 2012 and has come under pressure at Real Madrid, having failed to find the net in five games for his club.

"Karim started a lot of games before. He didn't start the last game. One of them will start," Deschamps continued.

"I believed in Karim, I still believe in him, and in Olivier. One can replace the other."