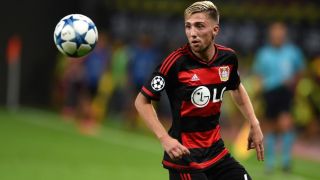 Kevin Kampl is standing by his decision to pull out of Slovenia's World Cup qualifiers with Slovakia and England despite his team-mates accusing him of "deserting" the squad.

Bayer Leverkusen midfielder Kampl withdrew for the doubleheader citing exhaustion and an infection but his decision did not sit well with the rest of the squad who released a statement that read: "For the national team you play with pride and passion.

"Kevin is an important part of a team that needs him. So we have to say he deserted us. The national team has to be above all of us. We are united in this message to Kampl."

The 25-year-old issued a riposte that he hopes will clarify the situation.

Kampl told www.ekipa24.si: "I would like to make some things clear. Firstly, I always play with pride and happiness for Slovenia and I intend to do so in the future.

"Secondly, I have made it clear I will be available next time, I just need some rest now.

"Thirdly, I swear that at the moment I am not in the right condition to help Slovenia. Yes, I have trained in Leverkusen but only on my own and I am having some blood tests because I don't feel good: I am exhausted. I wouldn't have been able to help Slovenia like this and I stand by my decision."

Kampl also denied suggestions his claims that players refuse to pull out of international squads for fear of possible repercussions was aimed at his Slovenia colleagues.

He added: "Also, some of the players and the fans have misinterpreted my words, perhaps I wasn't clear enough. I said players don't have the courage to do what I've done because they are afraid of the consequences. And by that I was not referring to any Slovenian players or any players in particular but those all around the world who do not admit to being exhausted and then pay the price later in the season."

Slovenia are third in Group F having drawn their opener with Lithuania.