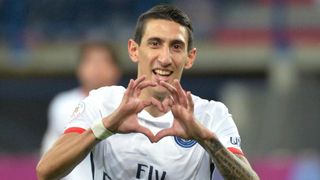 Angel Di Maria says he left Manchester United for Paris Saint-Germain to win trophies and has not seen anything this season to make him think he made an incorrect decision.

The Argentina international, 28, also felt Louis van Gaal's decision to move him into different positions hampered his chances of settling in the side following his 2014 move from Real Madrid in a £59.7 million deal.

After starting only 20 Premier League matches, he joined PSG for a reported fee of £44.3m last July and has already won Ligue 1 as Laurent Blanc's men chase an historic quadruple.

"It's more that they didn't let me settle properly than I couldn't settle," Di Maria told BBC Football Focus.

"I decided to leave, not only to be happy but to win things. I left and that team are still playing the same way - out of European competitions, far from being champions of the Premier League.

"I don't think it was my fault or the fault of my team-mates. I did all I could every time I was given the opportunity, but it didn't work out as I hoped."

Di Maria claimed Van Gaal had not deployed him properly and hailed the methods of current boss Blanc, who he credits for an impressive campaign which has seen him score nine league goals and produce 11 assists from 24 games.

"I think this also didn't help me settle. It's up to the manager to decide where and how every player should play, but I think that the player should be comfortable in that position and adapt to it.

"That is what I am doing here and I'm very thankful to the manager for it. From the beginning he was clear where he wanted to play me and has never changed his mind.

"He gave me total freedom to move where I need to move. I'm very happy here and it wasn't the case over there."