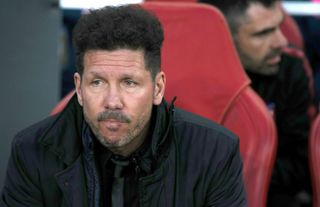 Diego Simeone suggested Atletico Madrid were not receiving fair treatment from officials after late goals condemned his side to a 2-0 defeat at Barcelona following Diego Costa’s red card.

Costa was dismissed in the 28th minute for squaring up to the referee, leaving his team-mates to face an uphill battle at the home of the league leaders.

They held out until the 84th minute when Luis Suarez broke the deadlock, moments before Lionel Messi made sure of a win which sends Barca 11 points clear of Atletico at the top of LaLiga.

“We have had many red cards, so we must be doing something wrong,” Simeone said in comments reported by Marca.

“I asked the referee at half-time and he told me Costa had said something wrong, but Costa assures me he did not.

“Other players have said things and not been sent off. This does not excuse what Costa has done. If the referee feels there has been an insult, the dismissal makes sense.

“But the treatment is not the same for everyone.”

The match was perhaps Atletico’s last chance to close the gap on Barcelona, which now stands at 11 points with seven games to go, but even if the title is gone, Simeone is happy with where his side stand.

“Our season is not over,” he said. “We have won the European Supercup, we have played in the Champions League. This result is a negative, but we do not forget where we have come from.

“I believe that everything that happens to us will make us stronger.”

Barca coach Ernesto Valverde denied the title race was over but will no doubt be feeling comfortable as attention shifts to Wednesday’s Champions League clash against Manchester United.

“This is a crucial victory,” he said. “Three crucial points. But we must continue. Everyone knew the importance of this game and we are a little closer. But there are still 21 points to be awarded and we still need to be champions.

“For now we have a game on Wednesday against Manchester United, a game in which we have a lot of hopes.

“We wanted to win tonight because it brings us a lot of confidence. We have matches now that follow very quickly. After Manchester United there will be in another week three LaLiga games.

“We must use the whole squad, that’s the reality. But we want to compete in all three competitions, because we have not won anything yet.”

Valverde said Costa’s red card had hurt Barca as well as Atletico as it disrupted the early rhythm of the game, but said Barca had been able to capitalise when their visitors began to tire.

“The match started well, with good pace and opportunities. Atletico wanted to hurt us on the attack,” he added.

“We had clear chances, with Jordi (Alba) hitting the post, Philippe (Coutinho) denied by the goalkeeper.

“But the red card changed everything, brought disruption, the match slowed down and we could not find our rhythm.

“Then in the second half we were better and the opponents began to tire physically.”